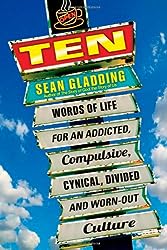 Ten is a book about the spiritual importance of the Ten Commandments. Written in a format that Brian McLaren called "creative non-fiction", Sean Gladding sets his discussion of Scripture in the middle of a modern day story. The characters are a small group of friends that gather in a coffee shop each week, and begin an extended discussion on the Decalogue. The discussion begins as one of the characters sees a debate in the news about whether or not the public display of the Ten Commandments is important, and moves on from there.

Gladding says this book was inspired by the people he was working with in a ministry that focused on reaching out with the grace of God to people struggling with addictions in Houston. And in fact, the back cover has a quote from the book that shares "We've been shaped by the things we've become enslaved to."

The study carefully goes from the tenth commandment to the first, clearing up misconceptions about what the Scripture says, bringing in helpful modern scholarship, and showing that God through the Ten Commandments is showing his people a way to health and freedom in a way that they have never experienced, and in a way that many of us rarely experience either. Too often we gloss over this familiar part of Scripture, and don't consider it closely. Gladding lets the Scripture speak to us in new ways in this fine book, and shows how the Ancient Word is as contemporary as yesterday's news.

A good book for the shelves of teachers, pastors, and lay persons alike.