Book Overview (or Review) of Jesus and the Land 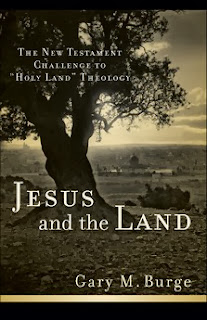 What does it mean to call the geography that includes both Palestine and Israel "The Holy Land"? What did it mean to the people in Bible times? Did Jesus look at the Holy Land differently than the traditionalists of his time and ours? How did New Testament believers understand the land of Judea and Galilee in relation to their faith in Gentile regions? These are some of the questions Gary Burge attempts to help explain in his excellent book Jesus and the Land.

Burge a little time summarizing the commitments of the Hebrew people both of ancient times, and even today to the what is called the Holy Land. He agrees with many Old Testament scholars as they summarize God's unique purposes and lessons to be taught through the Jewish people and their relationship to the land. Whether understanding land as promise, as gift (received promise), or as a blessing squandered and gift lost, the land of Israel was central to its identity as a people (as was true for almost every ancient culture).

Although the prophets, especially in the exile, were able to teach people that the God of Israel was the God of the whole world, and his potency not just limited and tied with the Holy Land, after the Israelites returned from exile, most of Hebrew theology and thought held a strong "land theology". This relationship between land and faith, however modified for Diaspora Jews in ancient times as well as modern ones, has always remained a strong one. There has always been a Jewish presence, however small, in the land of promise, and beginning in the late 1800s, the migration of Jews to the holy land was seen as an act of faith and a sign of renewed blessing by the Jewish people.

Even in the intertestamental period, however, their was also a large Diaspora Jewish population that was less tied to the land. At the time before Jesus and at the time of Jesus, there were more Jews living outside of Judea and Galilee than there were in this region. Burge reports that some estimates put Jews as making up 10 percent of the entire Roman Empire at the time of Jesus and the early church (p.18)

In the New Testament Jesus' ministry is grounded almost entirely within the land claimed by the twelve tribes of Israel. He expresses love for the natives of Israel, and ministers completely within that context. He does not, however, embrace the zealot movement (contra the claims of Reza Aslan), and says that it is not revolutionaries, warriors, or statesmen that will inherit the holy land, but the "meek". Yes, the work for the "earth" in the beatitudes can refer to all the planet, but many scholars believes it instead refers to the holy land. They come to this conclusion by understanding of common word usage as well as context. Jesus studiously avoids debates over Jewish claim to the land, implying that Biblical faith in God is not uniquely tied to the land.

Furthermore, while the gospel writers clearly communicate Jesus' ties with a historic place and people, they also wisely avoid a tie of faithfulness to Christ with the land. Over and over again, in different ways, the gospel writers ground the hopes and promises placed in land in the person of Jesus Christ.

One of the most interesting ways that John does this is in his famous discourse of the vine and the branches in John 15. Throughout the Old Testament the land of Israel is referred to as a vineyard, and the people of God (the Hebrews) as fruit of that vineyard. In John 15, Jesus refers to himself as the vine, and states that life and vitality as persons of faith is born out of being connected with him, not the land.(p.55)

In Acts, what Burge shares about Stephen and his sermon in Acts 7 is particularly interesting. He is accused of speaking against "this holy place" and against the law. As a Hellenistic Diaspora Jew converted to Jesus as Savior, his understanding of Israel is different that a Judean patriot or zealot. He "challenges the nature of provincial faith in Jerusalem" (p. 65). So he was killed. And the land of promise, in the book of Acts, begins in Jerusalem, but extends to the uttermost parts of the earth (1:8).

Paul has some deference and love for Jerusalem, but he never refers to Israel as a place, but exclusively as a people, a person, or a nation (p. 74). For Paul, the church and the believer is the Temple of God, not a building in Jerusalem. While Paul holds that the people of Israel have a special place in God's redemptive plan through history (Romans 9-11), he does not place any value in a theology of Jewish territorialism.

All of this and more leads one to a profound conclusion. While Israel may indeed be Holy Ground in the sense that we as people are historically tied to it through the stories of God's people that we claim as our own, Christian teaching in the New Testament in no way merits a commitment to a 'Christian Zionism' espoused by groups such as Christians United for Israel, Pat Robertson, John Hagee and the like. Instead, as Burge says, "This is a divinely appointed task to bring that which the Temple and the land once held--the presence of God--into the nations of the world" (p. 131).

Christians are to love Jews, but to stand on the side of justice for all people, including the Palestinians that currently inhabit the land as well. As Burge goes on to say, "When Christian theology serves at the behest of political or historical forces of any generation--be it ancient crusades, religiously fueled nationalism, or the call of Christian Zionists--it loses its supreme mission in the world." (p. 131)

Full of helpful teaching, good research, and wise insight, I recommend this book to anyone wanting to understand the importance of the Holy Land, and the Christian's place in such discussions and conflicts.