Book Review of Dakota: A Spiritual Geography by Kathleen Norris 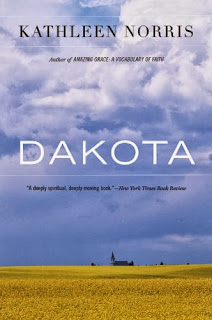 I have been doing a study on the theology and spirituality of place with some time I have been given by the church to study. Although, as you may see with some of the reviews on my blog, a little bit of the study is related to Biblical and historical matters, I have also included a number of reflections on how landscape and location influences spiritual development.

About 20 years ago, in Lemmon, SD, a woman named Kathleen Norris wrote a book about her spiritual journey and how it was influenced by her return home to the rural plains in the West River region on South Dakota (Lemmon also borders North Dakota, and her writing reflects this fact).

As a person who recently moved to South Dakota, I found her book rather interesting. I live in the Black Hills, which is in many ways a different landscape and culture than the rural northern plains, however, some of the folks I know come from places similar to Lemmon. And there is a lot that she shares about Dakota culture that might apply here too.

What is even more interesting than the specifics about Dakota is the process that she is using to understand how the land influenced her spiritual awakening and development. At risk of overusing a pun, she speaks highly of the "grounding" power of the Plains and the earthy nature of the people that inhabit these lands. At times, I felt like she was overly critical of small town culture. Overall, the book had a certain ring of truth and beauty.

One of the things that Norris does in this book is to draw lines between the power and beauty of plains spirituality, and in many ways compare it to the desert spirituality of the ancients, as well as comparing it to Benedictine spirituality. What these locations share in common is the ability to challenge folks to strip away all of the window dressing of faith, and challenges us to get back to the basics of the spiritual life. In all of these places, there is a simplicity required, ample space for solitude, and the challenge of working through difficulties with those you share in community instead of hiding from or running away from people.

This is a quick, nice and fun read, and I hope it will find its way into my study of the spirituality of place.