Book Review on Lessons from the East by Bob Roberts 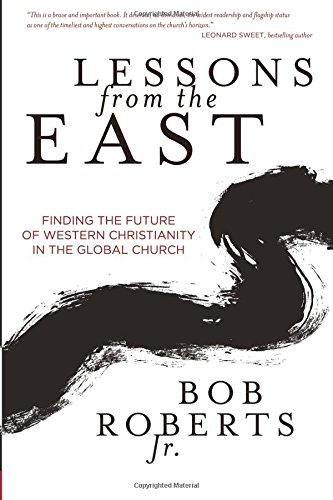 Lessons from the East: Finding the Future of Western Christianity in the Global Church
by Bob Roberts
ISBN 978-0-7814-1376-3
David C. Cook
Reviewed by Clint Walker

Bob Roberts is a fascinating Christian leader.  A country boy from East Texas, he seems at home in the environs of suburban Dallas, where he leads a megachurch of fellow Texans, At the same time, his missionary heart, his love for Jesus, and his passion for gospel ministry have led him to become a sophisticated global leader, engaging leaders from around the globe. Eager to bring his faith into the public sphere, he has formed friendships with pastors and politicians, most notably of late religious leaders in the Muslim world. Yet, as he has engaged churches and non-believers in many different cultural environments, he has not simply went to offer something to them, but rather has sought to learn and grow from what his friends around the world had to teach him. Some of these lessons are encapsulated in Lessons from the East.

At the risk of oversimplifying this very thoughtful and engaging work, I would say that Lessons from the East is part "The World Is Flat" for the church, and part Leslie Newbigin's missional theology, with some down-to-earth practical hooks that anyone can grab on to and apply to their church. Roberts book challenges its readers from the beginning to focus their efforts on taking the church into the world. He says, "The primary benefit we can offer our communities is creative, selfless, tenacious service....we build credibility in our communities by serving people outside our walls with no strings attached. (p. 14)." This book is focused on helping churches do that not just around the world, but also in their own back yards.  If the church takes Roberts' challenge seriously, it means radical changes in how churches function and the roles people take in local congregations. He delineates a number of transitions for churches to make, with practices for leaders in congregations as well as persons in the pew.