Book Review of the Butterfly Effect by Andy Andrews 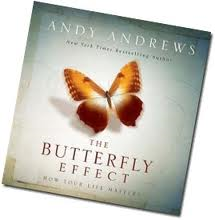 Wow! What an amazing book.

This book briefly describes what is known as the butterfly effect. Briefly stated, the idea is that a butterfly can flap its wings in a jungle somewhere, and that small act can set off a series of reactions that can lead to a hurricane being formed in another part of the world. At first this theory was mocked, but now, in a more scientific and general sense, the idea has been proven and is considered a scientific law.

Andrews uses this law of science and delves into human history in order to point to an important truth--everything matters. The decisions we make have far reaching impacts. He recounts the stand of General Chamberlain at Gettysburg, and shows how one small skirmish on one small in in one battle in one war changed the whole course of human history. He does the same with the story of Norman Bourlag, whom, through a series of relationships, he traces back to George Washington Carver, and his adopted parents.

Andrews then encourages all of us to remember that we can make a difference. And that our seemingly small acts of faithfulness can have a great impact.