Book Review of The Question of Canon by Michael Kruger 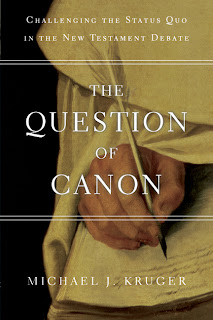 Every couple months or so, I watch a television show, read an article, or read a blog post that seems to promote a certain theory about the development of the New Testament. The language Kruger would use for these theories is that they have a viewpoint that promotes a view of the canon that is "external" to the Church and to the Scripture itself. The most common of these theories would say that we have now are our because Constantine and the Roman government forced the church to set a list of New Testament Scriptures in stone, and to avoid those other writings that might be revolutionary, counter to the mainstream of the faith, which also included documents such as the gnostic gospels.

Several conspiracy theories have adopted this Constantinian, external view of the development of the Canon. Some of the more popular writers that claim that the development of a clear understanding of the New Testament didn't happen until Constantine forced it on the church. People like Elaine Pagels and Bart Ehrman have been foisting these conspiracy theories about the New Testament canon upon the church for decades. Lately, with the re-discovery of the gospel of Judas and emphasis on other similar, later, unorthodox writings, it has become more popular to emphasize and foster these concerns.

In The Question of Canon Kruger follows up some of his other work to emphasize a more traditional view as, in fact, more historically grounded and intellectually tenable. He does so by addressing five areas of concern. Honestly confronting the biblical deconstructionists, he makes a compelling case for the core of the New Testament coming together in the late second century instead of the fourth.

For pastors and students of Scripture, this is an important apologetics piece to have on your shelf, both to study and to share with others.